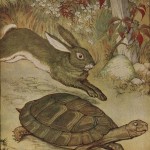 Quite a lot really.

For those who aren’t familiar with the story, the tortoise, fed up with the hare bragging about how fast he is, challenges him to a race. The race starts and the hare speeds off. He looks back and sees the tortoise slowly plodding along some distance behind him. It’s a nice sunny day, so he decides to take a quick nap. Afterall, he’s got plenty of time. He wakes up as the tortoise approaches the finishing line and, fast though he is, he’s unable to catch him. The tortoise crosses the line first and wins the race. And the moral of the story?

Slow and steady does it!

And it’s much the same in internet marketing too.

How many of us started our internet marketing careers, lured by the claims of six and seven figure incomes and four hour work weeks, only to find that it’s not quite like that?

Did you start pursuing one strategy only to decide that after three weeks, and with nothing in the bank, it didn’t work, and you started something else?

Are you on the verge of giving up because your first million seems a long way off?

Forget about internet marketing and just consider the offline world.

Were you able to run before you could walk?

Generally speaking success takes time. And you start by taking one small step. So why not apply this approach to your internet marketing career?

Here’s what I want you to do.

Put some time aside and write a list of all your expenses and how much they are. You’ll need to consider your annual expenses as there are some things, such as car insurance, you may not pay for every month. Because of this it may be best if you work through your last years bank statements, but if not, just try to be as thorough as you can.

Once you’ve listed them, divide each expense by 365, the number of days in a year, and rearrange them so that the smallest expense is at the top. When you’re finished you might have something like this. 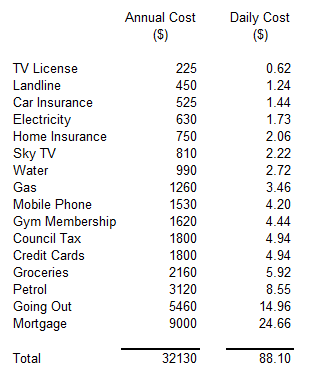 You’ve now calculated your cost of living. Or put another way, how much you need to earn to give up work.

Look at that. I bet you didn’t realise how small that get-out-of-job figure is.

Now relate it to internet marketing.

That $7 ebook that wasn’t worth selling. Well, if you can sell one a day, you’ve paid for the TV license, the landline, car insurance and electricity. Or whatever your equivalents are.

If you could sell one $27 product a day, you’ve covered everything up to and including the gym membership.

A $97 dollar product a day and you’re financially free!

Now, before you shout that I’m not comparing like with like, and that you have to deduct your internet related costs from your earnings before you start paying for your household bills, you’re right. But for many internet marketers, costs are relatively low, so you may not need to sell a lot more. And don’t forget, you can also increase your earnings by being smart.

And I know making a sale every day can also seem daunting, but there’s different ways of viewing that too. Perhaps you could target product launches and benefit from the initial surge in sales. Or maybe you focus on big spending times such as Christmas and Halloween. Sales don’t have to be linear.

And, chances are you’ll become more motivated as you see your bills being paid, and suddenly sales will become easier.

And when your bills are paid. Well then you can go for the big bucks.

Until then, as the tortoise said to the hare, slow and steady does it!

Over To You: Did you realise how little you needed to achieve financial freedom? Do you achieve more when you break things into smaller tasks?