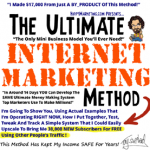 Yesterday I spoke about driving traffic to your website using both paid and free methods. A little while ago I picked up a copy of Tony Shepherds Ultimate Internet Marketing Method. In it he talks about how he uses one particular type of paid traffic to build his list and increase his sales. He also mentions that there’s a free way of doing this, it’s just quicker if you pay 🙂

It’s not a long report, it’s an entertaining read and it seems to make sense. Obviously I won’t tell you what he’s doing, that wouldn’t be fair to him, but essentially he explains how to implement and tweak a system so that your initial cost is not only recovered, but surpassed. Bit like paying $1 to make $1.20. No, not a bit like, that’s exactly what it is.

So you would have thought that I’d have jumped right in and started coining it. But no. Despite all the sense it made, I did nothing. Like many other products I’ve bought, it sat on the hard drive gathering dust. Perhaps I thought that I’d just be throwing money away.

Then along came a Penguin, not long after a Panda had been spotted, and I started to wonder if the long hours and hard work I was putting in trying to rank my sites organically were ever going to pay off. So I went back to the hard drive, dusted down the file and gave the report another read. This time I implemented it.

I’ve never paid for traffic before, which is perhaps why I’d previously failed to take action. The first step is often the hardest. I gave myself a small budget and set about implementing the strategy. If it worked I’d be onto something and could scale it up. If it didn’t I’d only lost a small amount.

I invested $125 in paid traffic and waited to see what would happen. And I didn’t have to wait long 🙂 Within 48 hours my site was getting hits and my list was growing 🙂 Now, it’s not like organic traffic with its alleged set and forget characteristics. When you stop paying the traffic dries up. But if you can successfully market to your growing list, your paid traffic will soon be paid for and then you’re in surplus. That could pay for the next rush of traffic and potentially still leave you with a profit. All depends on your marketing skills 🙂

I ended up with an additional 76 subscribers to my list, 6 of whom immediately unsubscribed. I guess they just wanted the freebie. For a first attempt I was quite impressed 🙂

Would I do it again? You bet! I just won’t leave it as long next time.

If you’re looking to drive more traffic to your website but think you can’t afford to pay, think again. In fact, now I’ve seen the results, which I’m sure I can improve on, I’m now thinking that I can’t not afford to pay.

If you want to know what we’ve been up to, just click on the ad below and grab yourself a copy of the report.

Over To You: Did you give it a go? Was it successful? If you’re still not sure about paid traffic, what’s holding you back?

email
print
Previous StoryTraffic – A Marketers Nightmare, Or a Walk in the Park?
Next StoryKeywords: The Key to Your Success?